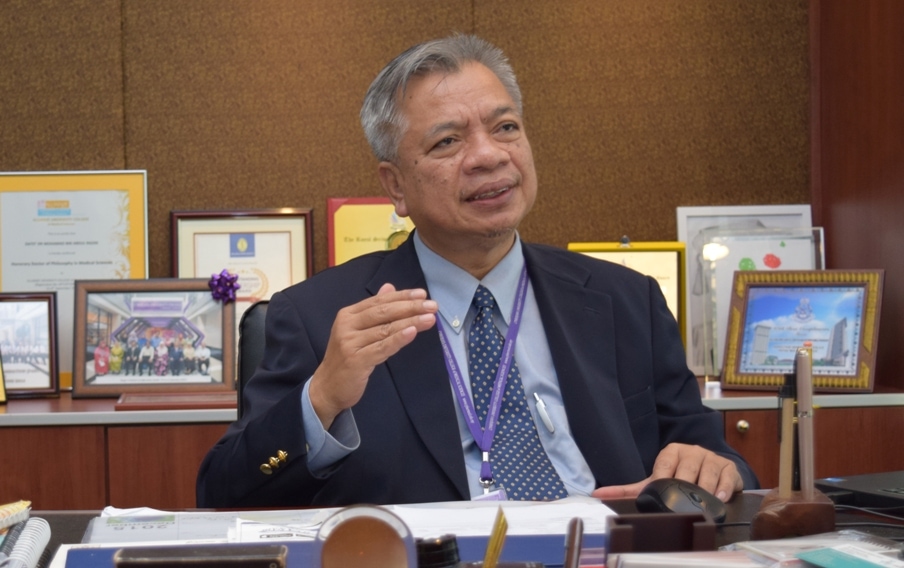 With overseas education being as expensive as it is and made worse by a lacklustre economic climate, scholarships become the frequently thought-of option. Yet these too are not impervious to today’s tough times

There’s the perception that studying medicine or pharmacy requires one to go overseas. After all, a limited number of local educational institutions offer these courses and competition is extremely fierce. Undoubtedly there’s also the view that if one wants quality, one has to go abroad.

This is a perception that needs fixing, particularly at a time when the ringgit is at an all-time low. Statistics show that the average cost of living for a student in the northern United Kingdom is approximately GBP11,010 per year – based on current exchange rates, that’s a whopping RM 73,520 every year. Furthermore, this is exclusive of tuition fees which can go up to GBP24,000 (RM160, 263) per annum. Studying in Australia too, can set you back just as much, with cost of living capable of reaching AUD18,610 (RM56,779) and tuition fees possibly amounting to AUD33,000 (RM100,682) annually.

With overseas education being as expensive as it is and made worse by a lacklustre economic climate, scholarships become the frequently thought-of option. Yet these too are not impervious to today’s tough times. Before the financial crisis that occured in 1997, there were about 100,000 Malaysian students studying abroad and many of them were on scholarships. However, this has been reduced to approximately 56,000 students in 2014, according to the UNESCO Institute for Statistics. Dig deeper into the numbers and one finds that the party footing the bill for this overseas education is the students themselves or their parents. The Ministry of Education (MOE) actually released statistics for the year 2013 showing that 72% of Malaysian students in the United States are self-funded. In Australia, this figure shoots up to 79%.

The numbers are enough to drive to despair a parent wishing to send his or her child abroad for an education in the medical field. Further alternatives are often looked for including turning to placement agencies. While these offer alternative institutions in which to study medicine -usually in Russia, Ukraine, Indonesia or more recently, Bangladesh – one should not take for granted that these institutions’ courses, being associated with a placement agency, are automatically recognized by the Malaysian government. Careful consideration and research has to be done, both with regards to the placement agency and the institutions to ensure that one is able to practice one’s profession  upon returning to Malaysia.

The truth is the quality of local courses in medicine, pharmacy and the medical sciences such as homeopathy as well as biomedical engineering can be just as good, if not better, than any offered abroad. An excellent example of this are the courses offered by Cyberjaya University College of Medical Sciences (CUCMS). In addition to the Bachelor of Medicine and Bachelor of Surgery (MBBS), CUCMS also offers courses in pharmacy, homeopathic medical science, biomedical engineering and technology, physiotherapy, psychology as well as occupational safety and health. With such courses available, the institution provides opportunities for a career in the medical sciences that isn’t just limited to medicine and becoming a doctor.

As a testament to the quality of its courses, CUCMS has been accorded a SETARA Tier 5 rating by the Malaysian Qualifications Agency (MQA). The SETARA or MQA Rating System for Higher Education Institutions in Malaysia is a system that ranks an institution by taking into account the quality of its teaching. It is founded on a framework that is benchmarked against international qualification systems such as the European Qualifications Framework. Other countries’ qualification structures which provide a gauge against which SETARA is measured include frameworks from England, Australia, New Zealand, Wales and Northern Ireland. Very simply put, the SETARA ratings system is based on international best practices with the added bonus of also taking into account local requirements.

Bearing this in mind, it is obvious that a Tier 5 rating accorded by MQA is no small feat. How has CUCMS managed to obtain such recognition? Here’s how: its graduates are evaluated not just by its lecturers but educators from other institutions as well, ensuring truly objective assessments. Sustaining its quality is a top priority for CUCMS and it ensures this by employing lecturers who are industry experts capable of providing their students relevant exposure.  This is amply illustrated by the CUCMS president, Professor Dato’ Dr. Mohamad Abdul Razak. A trained orthopaedic surgeon specialist, he has served as the director of Hospital University Kebangsaan Malaysia and the president of the Malaysian Orthopaedic Association, the latter from the year 1996 to 1998. He is also a visiting registrar of the Orthopaedic Department at Edinburgh University, in addition to being registrar and spinal injury fellow at the Southport Spinal Injuries Centre in Liverpool.

With the majority of its educators based in the country, many of CUCMS’ lecturers have been with the institution since its early days, ensuring consistent quality in teaching. This is an important point to look out for and yet often overlooked. While foreign lecturers tend to be looked upon more favourably, local, well-connected lecturers oftentimes become an important source of career growth and development for their students given their professional network. For instance, CUCMS’ Medical Dean, Prof. Dato’ Dr. Abdul Rahim Mohamed was formerly the director of the Planning and Development Division of the Ministry of Health, Malaysia before joining the university in 2012. Other medical-related fields too, are ably represented by their stalwarts. Professor Dr. Rosnani Hashim, the Dean of Pharmacy was formerly a member of Drug Control Authority (DCA) of the Ministry of Health and a member of the Pharmacy Board of Malaysia and the Asian Clinical Pharmacy Society. Professor Dato’ Dr. Mahmood Nazar, psychology professor at CUCMS on the other hand was the former Deputy Vice Chancellor of Universiti Utara Malaysia and Deputy Director-General (Operations) of the National Anti-Drugs Agency of Malaysia until 2011.

Given its highly rated courses and affordability, CUCMS is certainly an option that is worth exploring for those who want a successful career in medicine or the medical sciences. 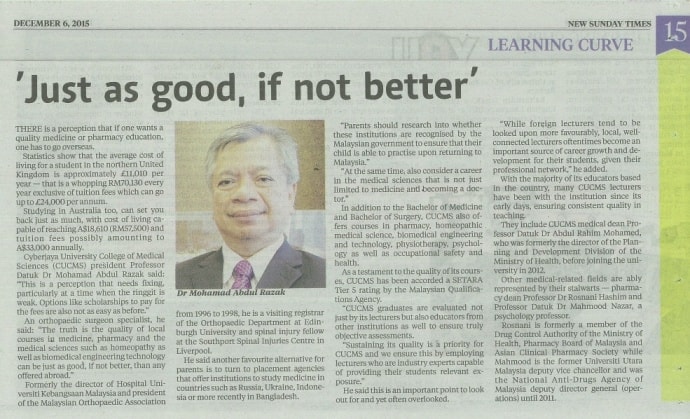 *This article first appeared in print in the 6th December 2015 issue of New Straits Times; Learning Curve. Exchange rates were based on prevalent rates at the time of publishing.